The Oklahoma legislature has granted final approval to a bill that will make it nearly impossible to obtain an abortion in the US state, in what reproductive rights advocates have said will be the most restrictive anti-abortion law in the United States.

The bill is part of an aggressive push by some states to scale back abortion rights as the US Supreme Court prepares to deliver a ruling that could upend a decades-old decision that legalised abortion in the country.

It comes on the heels of a leaked draft opinion from the top court that suggests justices are considering weakening or overturning the landmark Roe v Wade decision of 1973.

The Oklahoma bill by state Representative Wendi Stearman, a Republican, would prohibit all abortions, except to save the life of a pregnant woman or if the pregnancy is the result of rape or incest that has been reported to law enforcement.

“Is our goal to defend the right to life, or isn’t it?” Stearman asked her colleagues before the bill passed in a 73-16 vote on Thursday, mostly along party lines.

The bill is one of at least three anti-abortion bills sent this year to Oklahoma Governor Kevin Stitt, who has indicated he will sign it.

A Texas-style abortion law that prohibits the procedure after cardiac activity can be detected in the embryo, which experts say is about six weeks, already has taken effect and has dramatically curtailed abortion in Oklahoma.

Another bill set to take effect this summer would make it a felony to perform an abortion, punishable by up to 10 years in prison. That bill contains no exceptions for rape or incest.

“At this point, we are preparing for the most restrictive environment politicians can create: a complete ban on abortion with likely no exceptions,” said Emily Wales, interim president and CEO of Planned Parenthood Great Plains, which stopped providing abortions at two Oklahoma clinics after the six-week ban took effect earlier this month.

“It’s the worst-case scenario for abortion care in the state of Oklahoma,” Wales said.

Like the Texas law, the new Oklahoma bill would allow private citizens to sue abortion providers or anyone who helps a woman obtain an abortion. 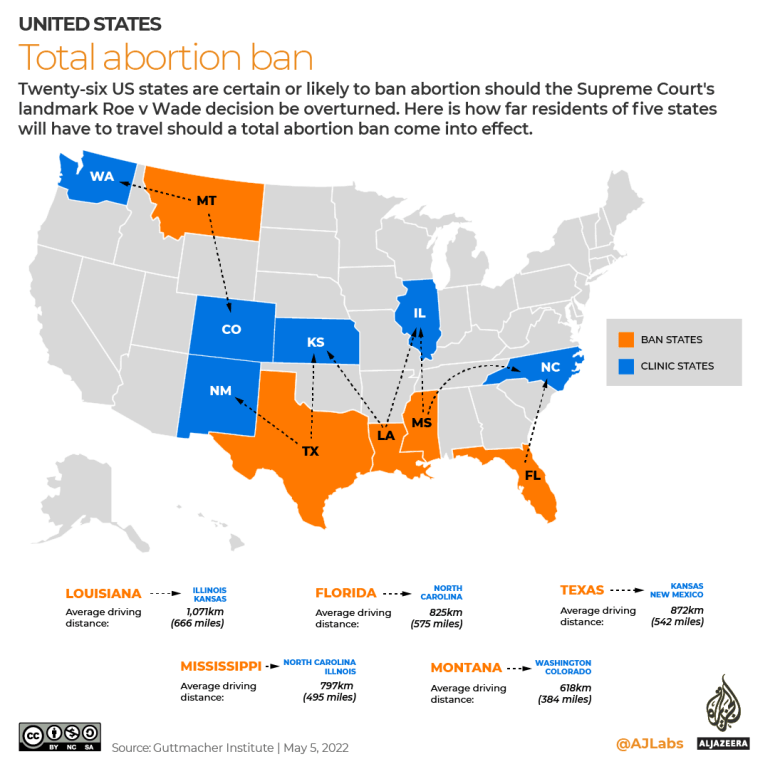 After the US Supreme Court allowed that mechanism to remain in place, other Republican-led states have sought to copy Texas’s ban. Idaho’s governor signed the first copycat measure in March, although it has been temporarily blocked by the state’s Supreme Court.

After Texas passed its bill last year, there was a dramatic reduction in the number of abortions performed in that state, with many women going to Oklahoma and other surrounding states for the procedure.

There are legal challenges pending in Oklahoma to both the bill to criminalise abortion and the six-week Texas ban, but the courts have so far failed to stop either measure.

If Roe is overturned, 26 states across the US are certain or likely to quickly outlaw abortion, according to the Guttmacher Institute, a sexual and reproductive rights advocacy group.

The likely rollback of abortion rights in the US has sparked massive protests in recent weeks, with advocates saying Black and other women of colour, as well as low-income women, will be disproportionately affected.

Physicians for Reproductive Health, a doctor-led national advocacy organisation, condemned the Oklahoma bill as “needlessly cruel” in light of Roe’s likely overturning in a few weeks. “The impact of this will be felt across the South, and consequently across the entire country. Abortion bans anywhere hurt people everywhere,” the group tweeted.

“Laws that cut off abortion access are laws that force pregnancy on people against their will,” the American Civil Liberties Union (ACLU) also said on Twitter after the Oklahoma law was passed.

“And by allowing almost anyone to sue, this ban exposes doctors, abortion funds, and even friends and family to bounties of at least $10,000,” the group tweeted. “People should have the power to make health decisions that are best for them, including whether to end a pregnancy, without interference from politicians. We won’t stop fighting for our right to abortion.”

Politicians aren’t waiting for the Supreme Court’s ruling to block our access to abortion.

Iran says only Salman Rushdie and supporters to blame for attack