Millions of workers – including police, doctors and teachers – are to receive below-inflation pay rises as part of a review that comes amid soaring prices and growing industrial unrest.

The United Kingdom has announced below-inflation pay rises for millions of workers including police, doctors and teachers as part of a pay review for public-sector staff that comes amid soaring prices and growing industrial unrest.

With inflation set to top 11 percent later this year, the increases given to millions of public-sector workers are being closely watched as ministers warn of the danger of a wage-price spiral and unions demand bigger raises for their members.

The pay awards included up to 9.3 percent for low earners in the National Health Service and an 8.9 percent starting salary boost for some teachers, although other increases, such as those for senior military and civil servants, were less than half that.

“Pay awards this year strike a careful balance between recognising the vital importance of teachers, whilst delivering value for the taxpayer, not increasing the country’s debt further, and being careful not to drive even higher prices in the future,” Education Minister James Cleverly said.

The increases are part of annual pay reviews due for almost half of some 5.7 million public-sector workers and come after more than a decade of freezes and constrained raises in many sectors.

“The government promised rewards for the dedication of the public-sector workforce during the pandemic. What they have delivered instead, in real terms, is a kick in the teeth,” said Sharon Graham, general secretary of the Unite labour union.

British consumer price inflation is hovering around 40-year highs and is predicted to reach 11 percent later this year, contributing to strikes over pay that have already disrupted transport networks and threaten a number of other services.

Public-sector pay growth has lagged behind that of the private sector, averaging just 1.5 percent over the past year compared with 8 percent for the latter. 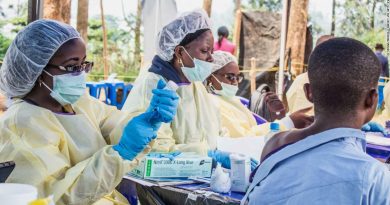