Walsapugala, Sri Lanka – Mahinda Samarawickrema, 49, will not be planting paddy this season.

After a government ban on chemical fertilisers cut his yield in half during the March harvest, the farmer, who owns eight hectares (20 acres) of paddy and banana, said he no longer has the income to maintain a farm – especially as his banana crop also looks set to fail.

“It’s a total loss,” the father of five said in mid-April, standing in a field of stunted banana trees in Sri Lanka’s southern Hambantota district. “When I look at this, I know I cannot get the usual yield.”

By this time of the year, most of Samarawickrema’s trees should be twice their height and in bloom, but only a few of the 1,300 trees in the weed-strewn fields have any flowers.

Most smallholder farmers in Samarawickrema’s Walsapugala village also say they will not be irrigating their fields in the growing season that runs from May to August. They say the fertiliser ban induced crop failures, coming amid nationwide fuel shortages, make farming untenable.

“There’s no point in farming any more,” said KA Sumanadasa, who grows brinjals (aubergine) on a his quarter of a hectare (0.6-acre) field. Taking out a bag of puny vegetables, many streaked with fungus, the 70-year-old says the switch to organic agriculture has brought down his yield from 400kg (882 pounds) per season to 50kg (110 pounds). With this output, Sumanadasa said he cannot recover the money he has invested in his farm.

“I can’t take the risk of farming now. I will only be growing enough to feed my family.”

The Movement for Land and Agricultural Reform (MONLAR), a non-government organisation, says most farmers in the surrounding Hambantota district, and in agricultural regions in the north, such as Anuradhapura and Polonnaruwa districts, are also halting operations this season.

That could leave Sri Lanka, which is already grappling with shortages of imported foodstuffs amid its worst-ever economic crisis, facing widespread shortages of domestically produced food, too.

“There will be a very hard period in the coming few months in terms of the food aspect,” said Gamini Senanayake, president of the Sri Lanka Council for Agricultural Research Policy. “There will be food shortages … We have to be prepared.”

An island nation of 22 million people, Sri Lanka used to be self-sufficient in food.

But President Gotabaya Rajapaksa’s drive to make the country the world’s first to fully adopt organic agriculture – by banning all synthetic agrochemicals, including fertilisers and pesticides – has proved disastrous for Sri Lanka’s two million farmers. Sold as a bid to improve soil health and reduce water pollution, the ban was imposed overnight in May last year.

Across the country, farmers, who were until then dependent on subsidised chemical fertilisers, suddenly found themselves left to their own devices. Despite the ban, they said the government neither increased production of organic fertiliser nor imported sufficient soil nutrients to meet their needs.

The result has been a dramatic fall in agricultural output across the country.

Official figures are not yet available for the March harvest, but experts have predicted a drop of between 20 to 70 percent, depending on the crop.

For rice, a staple of the Sri Lankan diet, output fell by between 40 and 50 percent nationwide in March, according to estimates. The drop has resulted in the island nation importing some 300,000 metric tonnes of rice in the first three months of the year – a sharp rise compared with the 14,000 metric tonnes it imported in 2020.

All of this comes as the country reels from a foreign exchange crisis that has left the government unable to pay for essential imports, including fuel and medicines. Shortages have led to sky-high inflation, long queues for diesel, rolling electricity cuts of up to 13 hours and warnings of a “catastrophic number of deaths” from doctors.

Tens of thousands of people have also taken to the streets in protest, blaming government mismanagement for Sri Lanka’s woes and demanding that Rajapaksa and his powerful brothers step down from their posts. The president’s elder brother, Mahinda Rajapaksa, was forced to resign as prime minister earlier this month after a night of deadly riots, during which protesters set fire to properties linked to the Rajapaksa family and other governing party politicians.

The president, however,  has continued to reject calls for him to step down.

He also initially denied any responsibility for the crisis, blaming it on Sri Lanka’s high debt burden and the COVID-19 pandemic, which hit the country’s lucrative tourism sector hard. But as protests have intensified, the president admitted on April 14 that he had made “mistakes” that need to be “rectified”.

His government has also turned to the International Monetary Fund for a bailout and promised to reinstate subsidies on fertilisers, although it is yet to provide any details of the policy.

“The president has agreed that the shift to organics was done too hastily. We have understood the errors and we will provide the fertiliser required by the farmers soon,” said Janaka Wakkumbura, who briefly served as agriculture minister in April after all of Rajapaksa’s ministers resigned in March over the worsening economic crisis.

“The World Bank has given us money to buy fertiliser and a few other agencies and countries are to help us too,” Wakkambura told Al Jazeera, without providing details.

But with Sri Lanka’s foreign reserves having dwindled to $1.8bn at the end of April and Russia’s invasion of Ukraine pushing up fertiliser prices in the world market, experts have said it is not clear how the government can afford to import enough soil nutrients for its two million farmers, much less subsidise them.

Lionel Weerakoon, former senior scientist at Sri Lanka’s Department of Agriculture, said the government and private parties had spent about $259m on importing fertiliser in 2020. The bill for 2021 could be between $300m-440m and potentially double that this year.

“The situation is even worse now because Russia, Belarus and China have limited fertiliser exports. If we are to purchase a similar quantity of fertiliser as we did in 2020, we might have to spend $600m,” he said. “The overall management of the country under this government has been disastrous.”

Experts are now predicting even greater hardship in Sri Lanka.

Food inflation, which is currently at about 30 percent, could rise even further.

Describing Sri Lanka’s food crisis as “a man-made disaster,” she said the country will have “serious problems with respect to childhood malnourishment and malnutrition among pregnant women and lactating mothers”.

She added, “In the next four to six months, I think we will be facing more hardship than what we face right now.”

In Walsapugala, farmers said they were worried about the future.

Despite the government reversing its ban on agrochemicals, they are unable to find adequate supplies or afford the sky-high prices charged by importers.

“Our lifestyle has been destroyed,” said Ajith Kumar, who like Samarawickrema, grows bananas.

“We are relatively small-scale farmers,” he said. “We don’t have any savings. We sustain ourselves from this land. But because we are unable to afford farming, we now have no way to pay back our loans and no way to pay for our children’s education. 25 million children missed out on lifesaving vaccines in 2021, WHO and UNICEF data shows 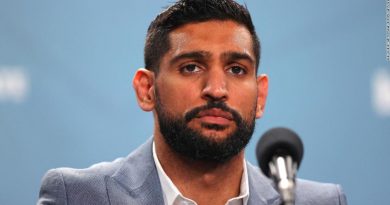 Boxer Amir Khan says he was robbed at gunpoint in London