Singaporean Norasharee bin Gous, 48, and Malaysian national Kalwant Singh, 31, had their capital sentences carried out on Thursday at Changi Prison Complex, the Singapore Prison Service told CNN in an email.

Their executions come just two months after Singapore controversially hanged a man with intellectual disabilities for drug trafficking and bring the total number of death sentences carried out by the country this year to four.

In a statement Tuesday, Singapore authorities said Norasharee and Singh — both convicted of drug trafficking and sentenced to the mandatory death penalty — had exhausted their legal appeals.

Both men had been on death row for the past six years while numerous campaigners called for clemency. The two executions “appear to be part of a new wave” of hangings in Singapore, Amnesty International Malaysia said in a statement earlier this week.

According to the Central Narcotics Bureau, both men were sentenced to death in June 2016. Singh had been found guilty of possessing 60.15 grams (2.1 ounces) of heroin and trafficking in 120.9 grams of the drug, while Norasharee was convicted of soliciting a man to traffic 120.9 grams of heroin.

In Singapore, trafficking a certain amount of drugs — for example, 15 grams (0.5 ounces) of heroin — results in a mandatory death sentence under the Misuse of Drugs Act, though the law was recently amended to allow for a convicted person to escape the death penalty in certain circumstances.

In April, Singapore executed Malaysian citizen Nagaenthran K. Dharmalingam, 34, in a case that sparked international outcry following psychologists’ assessment he was intellectually disabled with an IQ of 69.

Dharmalingam was arrested in 2009 for trafficking 42.7 grams (1.5 ounces) of heroin then convicted and sentenced to death in 2010.

Singapore’s courts rejected multiple appeals to overturn Dharmalingan’s execution, in which his lawyers argued he should not have been sentenced to death because he was incapable of understanding his actions.

The case put the city-state’s zero-tolerance drug laws back under scrutiny, with human rights advocates arguing the mandatory death penalty for drug trafficking is an inhumane punishment.

Campaigners say tough drug laws in many Southeast Asian countries, including Singapore, have done little to stop the region’s multibillion-dollar illicit drug trade.
“The government of Singapore’s persistence in maintaining and utilising the death penalty has only led to global condemnation and tarnishes Singapore’s image as a developed nation governed by the rule of law,” the Anti-Death Penalty Asia Network said in a statement on June 30. 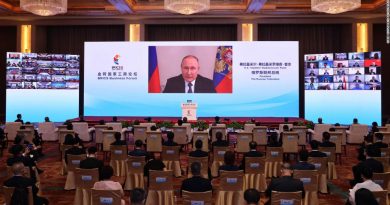 Putin says Russia is rerouting trade to China and India