The Inter-American Court of Human Rights (IACHR) has urged Peru not to release former President Alberto Fujimori, saying a decision last month to reinstate a presidential pardon did not give enough weight to the right to justice of Fujimori’s victims.

The IACHR resolution published on Friday overrules Peru’s top Constitutional Court, which had ruled on March 17 to allow Fujimori’s release on “humanitarian” grounds.

Fujimori, president from 1990 to 2000, has been serving a 25-year sentence since 2009 for two massacres committed by army death squads during his presidency.

Twenty-five people, including a child, were killed in the supposed “anti-terrorist” operations in 1991 and 1992.

Peru’s Constitutional Court had last month reinstated a controversial 2017 presidential pardon for Fujimori on health concerns that had already once been overturned in part due to decisions issued by the Costa Rica-based IACHR.

The IACHR told Peru in late March to abstain from releasing Fujimori until it could review the matter, however. Its new decision closes the door on the divisive former leader leaving prison for now.

“The State of Peru must refrain from implementing the sentence handed down by the Constitutional Court of Peru on March 17, 2022, which reinstates the effects of the pardon for humanitarian reasons granted to Alberto Fujimori on 24 December 2017,” the court said on Friday.

Peru has said it would abide by any decision of the IACHR.

While Fujimori is hailed by some for having restored economic stability and defeating the Shining Path Maoist armed group, he was also condemned for his violent methods, including using death squads and sending the military to shut down Congress and the judiciary in 1992.

His administration is also accused of forcibly sterilising Peruvian women under the guise of a family planning programme, while the former president has faced corruption allegations, as well.

Protesters took to the streets of the capital, Lima, after the Constitutional Court’s decision last month, calling on the government to ensure that Fujimori remains behind bars for the full duration of his sentence.

Many demonstrators also criticised the ex-leader for failing to acknowledge his crimes, or apologising to his victims.

Fujimori’s family has submitted several petitions to have him released on health grounds, but those have all been rejected.

His daughter Keiko Fujimori, who has lost three presidential election runoffs, said last year she would pardon her father if elected.

She was defeated in June by left-wing former teachers’ union leader Pedro Castillo and now faces prosecution over accusations of illegal campaign funding in her failed 2011 and 2016 presidential bids. 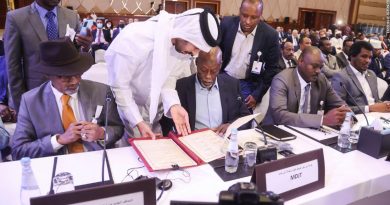