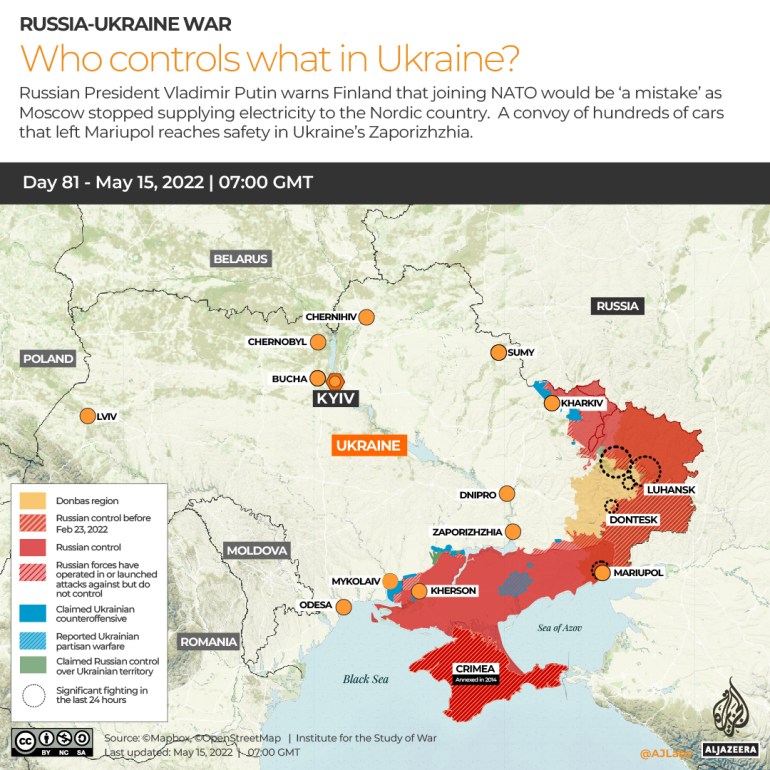 The US Secretary of State Antony Blinken met with French Foreign Minister Jean-Yves Le Drian in Paris on Sunday, ahead of the US-EU Trade and Technology Council ministerial dinner.

“The two discussed issues of importance in the bilateral relationship, especially the urgent need to confront global food insecurity exacerbated by Russia’s unjust and unprovoked invasion of Ukraine,” a statement from Blinken’s office said.

Pleased to meet again with French Foreign Minister @JY_LeDrian while in Paris for the Trade and Technology Council dinner. We discussed bilateral issues and our mutual concern about growing global food insecurity resulting from Russia’s unjustified war in Ukraine. pic.twitter.com/6CQJSTLmQ0

Ukraine’s gas transit system operator has said that it had resumed operations at two distribution stations in the Kharkiv region and restarted gas supply to more than 3,000 consumers, Reuters reports.

“Both stations were shut down due to damage to the main gas pipeline in the Kharkiv region as a result of hostilities,” the operator said in a statement, adding that the damages have now been repaired.

Some 54 gas distribution stations in seven regions of Ukraine remain shut down, the operator added.

NATO and the United States say they are confident Turkey will not impede the membership of Finland and Sweden in the Western military alliance, despite Ankara expressing reservations.

Turkey laid out demands on Sunday on the sidelines of a meeting of NATO foreign ministers in Berlin, saying it wanted the two Nordic countries to end support for Kurdish militant groups present on their territory, and to lift the ban on sales of some arms to Turkey.

NATO Secretary-General Jens Stoltenberg said he was confident “that we will be able to address the concerns that Turkey has expressed in a way that doesn’t delay the membership”.

In a post on his Telegram channel, Ramzan Kadyrov told Recep Tayyip Erdogan not to let himself be fooled by “criminals who want to avoid trial and well-deserved punishment with your help”.

Speaking of Ukraine’s Azov regiment, Kadyrov said: “these are are murderers and atheists, whom they now want to present to you as innocent victims of Russian aggression”.

Sanctions block up to $18 bn of Belarusian EU, US exports

Sanctions imposed on Belarus have blocked $16-$18 billion worth of its annual exports to the West, the Belta news agency cited Belarusian Prime Minister Roman Golovchenko as saying.

“Because of the sanctions, almost all of Belarus’s exports to the countries of the European Union and North America have been blocked,” Golovchenko said, according to a transcript of an interview with the Dubai-based Al Arabiya television published by the Belta state news agency.

President Alexander Lukashenko has insisted that Belarus must be involved in negotiations to resolve the conflict in Ukraine, saying also that Belarus had been unfairly labelled “an accomplice of the aggressor”.

Locals say intentional flooding in Ukrainian village ‘worth it’: Reuters

The intentional flooding of a small village north of Kyiv that created a quagmire and submerged cellars and fields, but prevented a Russian attack on the capital, was worth all the sacrifice, residents have said

Ukrainian forces opened a dam early in the war in Demydiv, causing the Irpin River to flood the village and thousands of acres around. The move has since been credited with stopping Russian soldiers and tanks from breaking through Ukraine’s lines.

“Of course, it was good,” said Volodymyr Artemchuk, a 60-year-old resident of Demydiv. “What would have happened if they (Russian forces) …. were able to cross the little river and then went onto Kyiv?”

Another resident, Oleksandr Rybalko, told Reuters that more than a third of some fields have been flooded. Some two months later, people in the village were still dealing with the aftermath of the flooding, using inflatable boats to move around and planting whatever dry swaths of lands were left with flowers and vegetables.

Mitch McConnell, the minority leader of the US Senate, says Sweden and Finland would be “important additions” to NATO as he led a delegation of Republican senators to the region in a show of support against Russian aggression.

McConnell also called on US President Joe Biden to designate Russia as state sponsor of terrorism over its invasion of Ukraine.

Speaking to reporters from Stockholm, McConnell said that that Finland and Sweden, unlike some members of the Western alliance, would likely be in a position to pay their NATO obligations and would offer significant military capabilities.

“They will be important additions to NATO, if they choose to join,” he said, adding, ”I think the United States ought to be first in line to ratify the treaty for both these countries to join.”

Russian soldiers will bring ‘evil back to Russia’: Zelenskyy

Zelenskyy has denounced Russian attacks on several Ukrainian cities on Sunday, saying the brutality “which Ukraine is experiencing every day, will only lead to the fact that Russian surviving soldiers will bring this evil back to Russia”.

He mentioned missile strikes on Lviv and the shelling of Hulyaipole, Severodonetsk, Lysychansk, as well as the cities and communities of the Donetsk region.

“They will bring it back because they will retreat. This is how all the feverish activity of the Russian military we see now will end,” he said.

Ukrainian President Volodymyr Zelenskyy has said that the Russian troops were “at a dead end” in the conflict with Ukraine.

His nightly address comes as Ukraine said it held off Russian offensives in the east and Western military officials said the campaign Moscow launched there after its forces failed to seize the capital of Kyiv has slowed to a snail’s pace.

Zelenskyy said that “the time will surely come when the Ukrainian people fully force” Russia to “recognise reality.”

The Ukrainian army continues to control around a tenth of the eastern region of Luhansk despite coming under heavy Russian attacks, according to its governor.

Serhiy Haidai said on Sunday that the Russians had not yet been able to capture the outskirts of the cities of Rubizhne, Severodonetsk and Lysychansk.

Moscow had declared last week that pro-Russian separatists had advanced to the administrative borders of Luhansk with the help of the Russian army.

Haidai said these claims were “fantasy.”

Ukraine says Russia attempting to encircle its forces in Donbas

Russia is pummelling positions in the east of Ukraine, its defence ministry has said, as it seeks to encircle Ukrainian forces in the battle for Donbas and fend off a counteroffensive around the strategic Russian-controlled city of Izium.

Russia said it had struck Ukrainian positions in the east with missiles, targeting command centres and arsenals as its forces seek to surround Ukrainian units between Izium and Donetsk.

Ukrainian President Volodymyr Zelenskyy said the situation in Donbas remained very difficult and Russian forces were still trying to salvage some kind of victory in a region riven by conflict since 2014. “They are not stopping their efforts,” he said.

Jens Stoltenberg, the head of the North Atlantic Treaty Organization (NATO), has said that Ukraine could win the war against Russia, as he called for the fast-track approval of expected bids by Finland and Sweden to join the alliance.

“Ukraine can win this war. Ukrainians are bravely defending their homeland,” Stoltenberg said following a NATO meeting in Germany.

Russian military advances appear to be faltering, he said, adding that NATO must continue to step up its military support to the country.

“Russia’s war in Ukraine is not going as Moscow had planned. They failed to take Kyiv. They are pulling back from around Kharkiv. Their major offensive in Donbas has stalled. Russia is not achieving its strategic objectives.”

An assessment by British military intelligence found Russia had lost about a third of the ground combat force deployed in February. Its Donbas offensive had fallen “significantly behind schedule” and was unlikely to make rapid advances during the coming 30 days, the assessment said.

Hello and welcome to Al Jazeera’s continuing coverage of the war in Ukraine.

Read all the updates from Sunday, May 15 here.

Love It or List It. Is a HELOC Right for You?

About 6.8 million have left Venezuela due to the fact 2014 and exodus grows