European Union leaders will impose new sanctions on Russia, freezing its assets, halting its banks’ access to European financial markets and targeting “Kremlin interests” for its invasion of Ukraine, senior officials have said.

An emergency summit at 19:00 GMT on Thursday will also discuss offering EU candidate status to Ukraine, Lithuania’s President Gitanas Nauseda said, a step Kyiv has long called for, though it may not win approval from all EU leaders.

Russian forces rained missiles on Ukrainian cities, including the capital Kyiv, and landed troops on its Black and Azov Sea coasts on Thursday, in the biggest attack by one state against another in Europe since World War II.

The EU said it had summoned Russia’s ambassador to Brussels to condemn “the unprovoked, unjustified invasion”, warning him that a new “hard-hitting” package of sanctions would be decided at the summit in coordination with its transatlantic partners.

“We condemn this barbaric attack and the cynical arguments to justify it,” European Commission chief Ursula von der Leyen said. “It is President Putin who is bringing war back to Europe.”

“With this package, we will target strategic sectors of the Russian economy by blocking their access to technologies and markets that are key to Russia,” she added. “We will weaken Russia’s economic base and its capacity to modernise.”

Russian assets in the EU would also be frozen and Russian banks’ access to Europe’s financial markets would be stopped.

However, cutting Russia off the SWIFT global interbank payments system – one of the toughest non-military sanctions the West could impose – is unlikely to be agreed to at this stage, several EU sources told the Reuters news agency.

The EU approved a first round of sanctions on Wednesday, including blacklisting Russian politicians and curbing trade between the EU and two breakaway regions of eastern Ukraine whose independence Moscow has recognised.

The new measures, to be discussed at the evening summit of national EU leaders, will be “the harshest package of sanctions we have ever implemented”, said the bloc’s foreign policy chief, Josep Borrell.

“This is among the darkest hours for Europe since the end of World War II … Russia’s leadership will face unprecedented isolation.”

The EU will also prepare a new aid package for Ukraine, he added.

“We will also be active in supporting evacuation operations, including our own staff in zones affected by this Russian attack,” Borrell said. 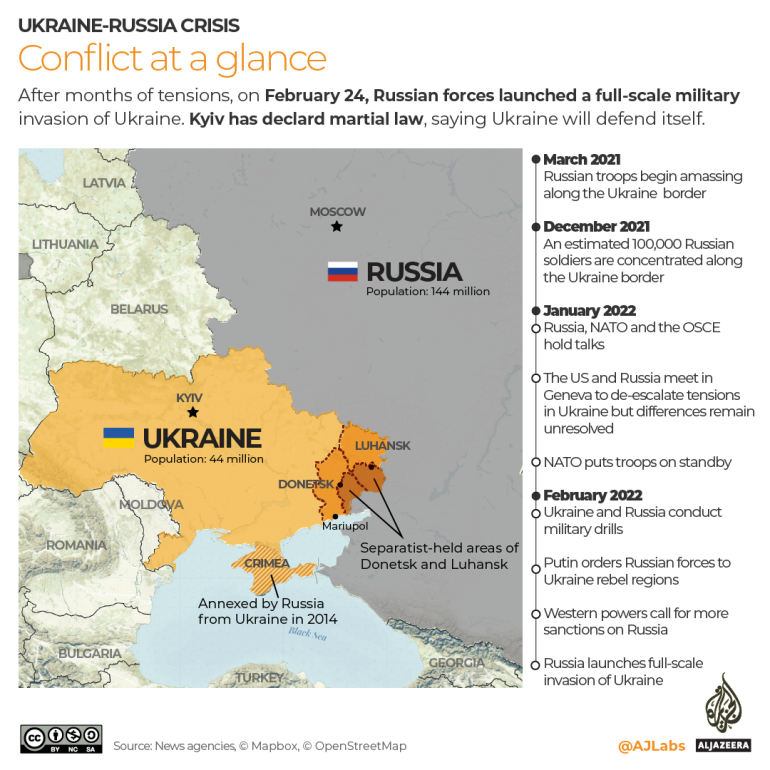 The main features of the new sanctions package had been agreed upon by member states, the DPA news agency reported, citing diplomatic sources. The measures would target Russia’s energy, finance and transport sectors.

The measures also include export controls on key technologies and restrictions on travel to the EU with diplomatic and service passports.

Moscow promised to respond in kind to “unfriendly” EU sanctions imposed for its invasion of Ukraine.

“In accordance with the principle of reciprocity, which is fundamental to international law, we will take tough retaliatory measures,” the foreign ministry said in a statement.