Eight contenders will be on the ballot paper when Conservative MPs in the UK begin voting on Wednesday to elect a successor to Prime Minister Boris Johnson, the chairman of the 1922 Committee, Sir Graham Brady, has announced.

Johnson was forced to step down after dozens of members of government resigned in protest after a series of scandals.

Moments before the announcement in a Commons committee room, former health secretary Sajid Javid said he was pulling out having, apparently failed to attract enough support.

Earlier Transport Secretary Grant Shapps announced that he was abandoning his bid and would be supporting Sunak, the former chancellor.

Backbencher Rehman Chishti – seen as the rank outsider – also said that he was dropping out having failed to get enough nominations.

Meanwhile, Truss, the foreign secretary, gained the endorsement of prominent Johnson loyalists Jacob Rees-Mogg, Nadine Dorries and James Cleverly, in what was seen as a concerted move to prevent Sunak from entering No 10. 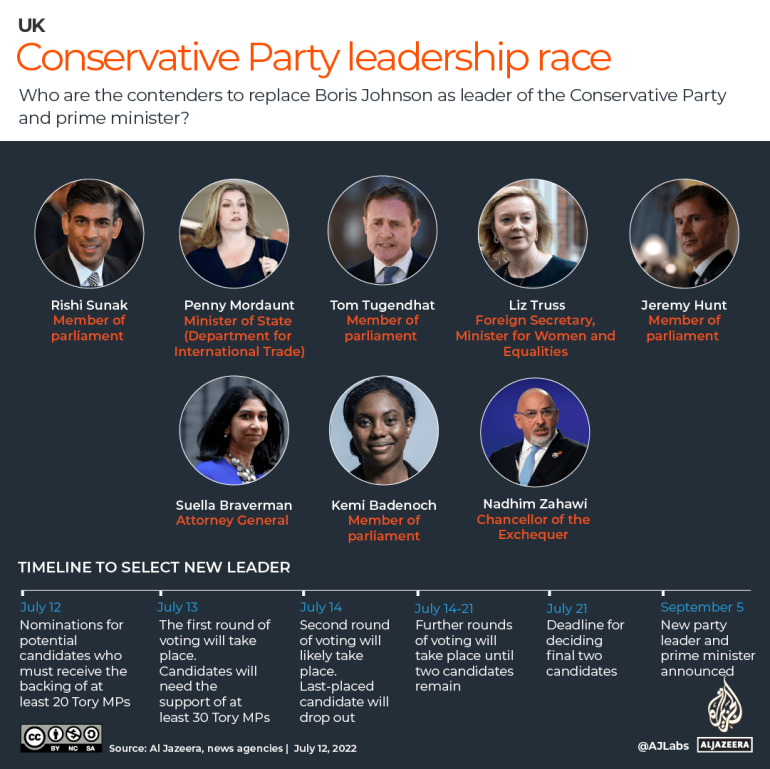 Many supporters of the prime minister remain furious with Sunak for the role he played in bringing him down, with his decision last week to quit helping to trigger a further slew of resignations.

The next British leader faces a daunting in-tray while support for the Conservatives is also falling, polls show.

The UK’s economy is facing rocketing inflation, high debt, and low growth, while people grapple with the tightest squeeze on their finances in decades, all set against a backdrop of an energy crunch exacerbated by the war in Ukraine which has sent fuel prices soaring.

As the contest heated up, rival campaigns stepped up private criticism of each other and pointed to either financial or other questions hanging over their opponents.

Sunak kicked off his campaign by portraying himself as the serious candidate, promising “grown up” honesty “not fairy tales”, seeking to contrast himself with the extensive tax cuts pledged by most of the other candidates.

“It is not credible to promise lots more spending and lower taxes,” Sunak said, saying tax cuts could only come after soaring inflation was tackled.

As finance minister, Sunak set the UK on course to have its biggest tax burden since the 1950s, and most of the other hopefuls have turned their fire on him by saying they would oversee cuts immediately.

The former finance minister has the widest support among colleagues who have publicly expressed their views.

Mordaunt, a junior trade minister who is also heavily tipped, topped a poll of Conservative members on Monday and she too has tried to strike a more measured tone on tax, saying that while she would cut taxes: “I will pioneer sound money.”

“I am a small state, low tax conservative, but I also believe we need to use the levers of government to support jobs and livelihoods through difficult economic situations,” she wrote in the Daily Telegraph newspaper.

The 1922 Committee of Conservative members of parliament which is organising the contest says the field will soon be whittled down with repeated votes in the next few weeks, with the final two then selected by the fewer than 200,000 party members by July 21.

The winner, and UK’s new prime minister, will be announced on September 5.
Meanwhile, the opposition Labour Party said the government had blocked its attempt to call a confidence vote in Johnson on Wednesday to force him from office immediately.

The government said that it would allow Labour to call a confidence vote if the wording of the motion was changed to remove reference to Johnson.