Plastic foam like Styrofoam is a ubiquitous, harmful, and nearly immortal single-use material that is long overdue for a good, green replacement — and Cruz Foam is here to supply it. The startup creates a durable yet backyard-compostable packing foam out of  shrimp shells produced (and discarded) by the seafood industry. It recently extended its seed round to accommodate the interests of Leonardo DiCaprio and Ashton Kutcher, and is scaling up to meet the demands of its first major customer, Whirlpool.

I met Cruz Foam co-founder John Felts during the memorable Accelerator at Sea hosted by the Sustainable Ocean Alliance. His pitch made perfect sense: create a biodegradable alternative to expanded polystyrene (EPS) foam using a material provided in abundance by nature.

This material, chitin, makes up the shells of shrimp, crabs, and other crustaceans in and out of the sea. It’s tough and versatile but, like any part of a living creature, decomposes quickly and safely. Best of all, it’s produced in enormous quantities by the seafood industry — there are really almost no uses for the stuff, so thousands of tons of shells pile up outside shrimp processing plants, most of which ends up going to landfills. People are literally paying someone else to take this stuff.

Named for the city where it started, Santa Cruz, Cruz Foam’s innovation is a patented process for this surplus chitin where shells go in one end and out the other comes a lightweight, durable sheet of foam with many of the most desirable aspects of EPS. It can essentially be swapped in one-for-one with the common petroleum-based packing material, molded and cut to practically any shape. (And in case you’re wondering, no, it doesn’t smell like old shrimp.)

“You combine chitin with some starches and low grade fibers, it’s all bio-based,” said Felts; the company elaborated in an email that fungi, hemp, recycled paper and other sources also play a role. “If you threw this stuff in your garden, it would be gone in less than a month.” (Or more; the speed differs depending on moisture and temperature, like regular compost.) 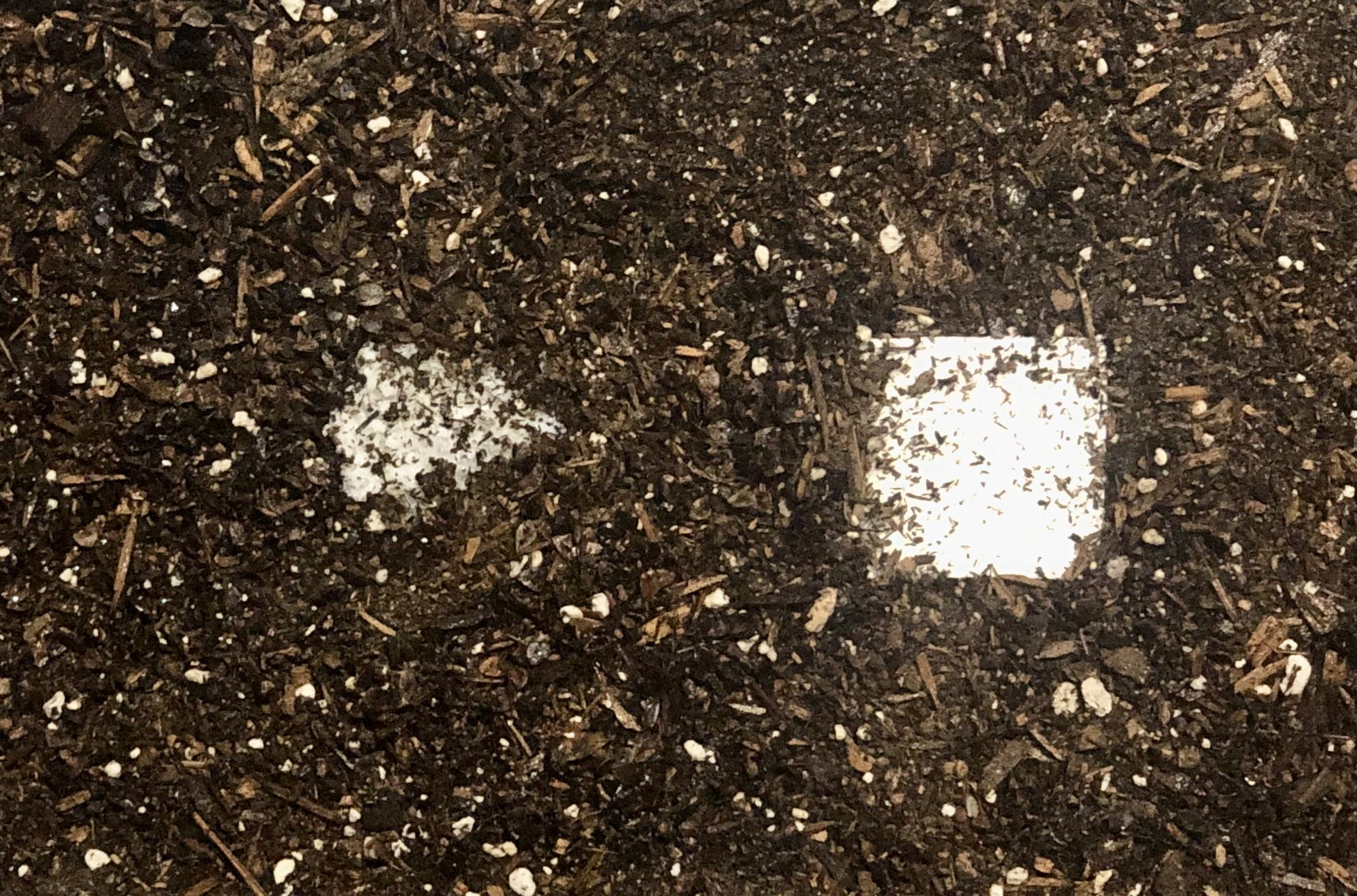 A block of Cruz Foam (left) after two days in moist soil; EPS is on the right (and it’ll probably look like that for a few hundred years).

Early on, the startup experimented with all kinds of formulations, finding that the foam could be tuned to meet diverse requirements for shape, rigidity, and so on. “We haven’t found a limit to what we can do with this foam,” said Felts. “But it’s not just about how we can produce this cheaply — it’s about a product that can fit into the ecosystem, all these existing processes, and also end of life. We don’t want to introduce materials that are just gonna be another problem.”

The company kept the lights on for the period after I met them with an SBIR award from the NSF, with the Phase I and II awards yielding more than $2 million in non-dilutive money to work with.

I feared when Felts pitched his company back on the boat that technical innovation simply wouldn’t be enough to get their foot in the door in an industry as huge and traditional as packaging. Fortunately the team understood it needed to find niches where it could attract significant corporate interest while keeping R&D costs down. They soon found out everyone is quietly on the lookout for something better, and existing green alternatives haven’t panned out.

While EPS is, like many plastic products, nearly impossible to beat in terms of performance and industry inertia, the tide is turning against the category as the pervasive pollution it leads to is repeatedly driven home by researchers. The recent revelation that practically every animal on the planet has microplastics in its bloodstream and organs probably comes as no surprise to anyone in ecology, but it is one of several now inescapable public realities that have companies running to invest in green alternatives to their most wasteful habits and supply chain links. EPS is toxic both ecologically and reputationally, but the next best thing is three times the price; Cruz Foam can slip in with an option that’s not wildly more expensive, but is as green as it gets. 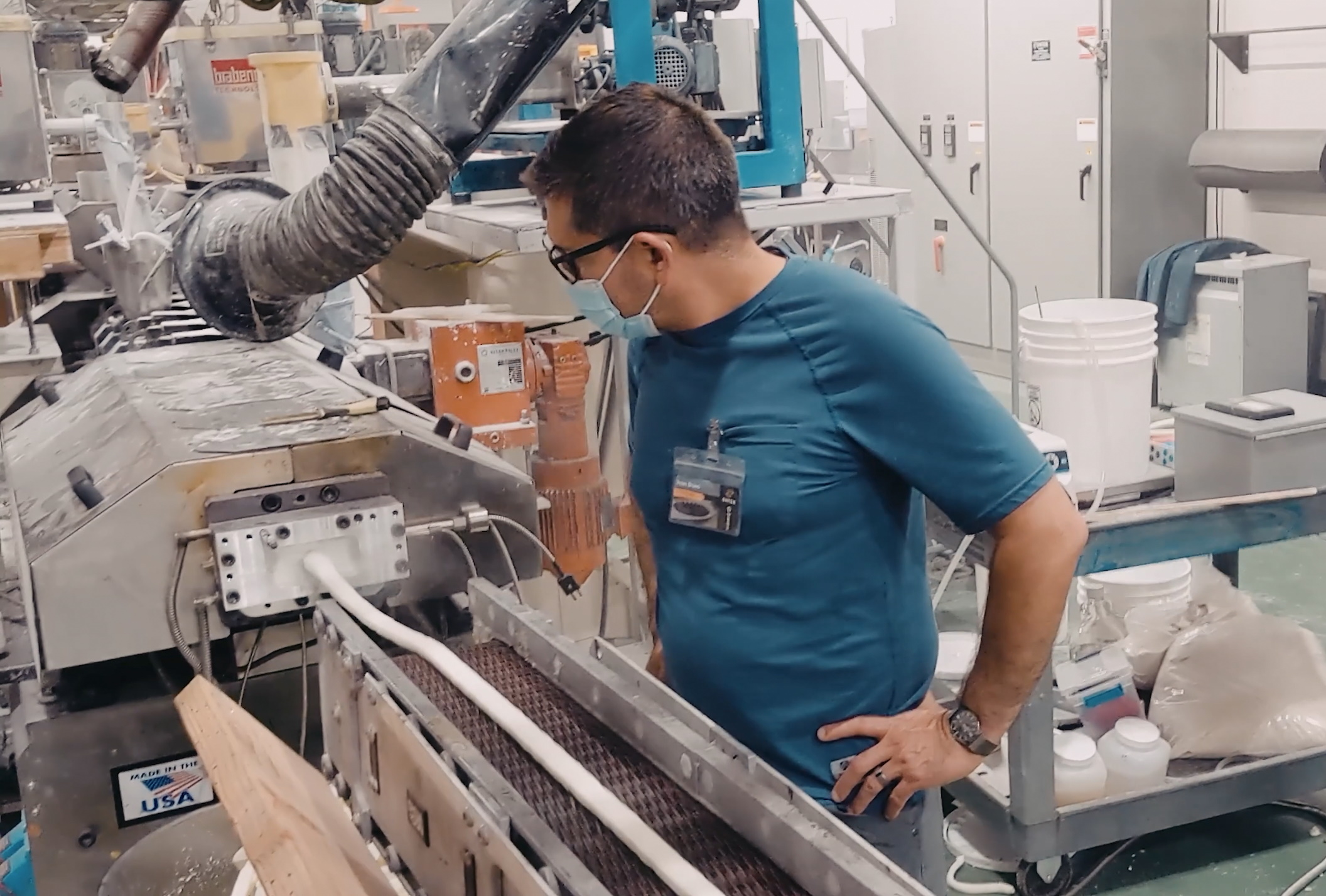 From prototypes to multi-million shipments

Whirlpool is one of those companies that has historically relied on Styrofoam and other plastic packaging products, but in recent years has been trying to reform itself with a pledge to go entirely renewable. 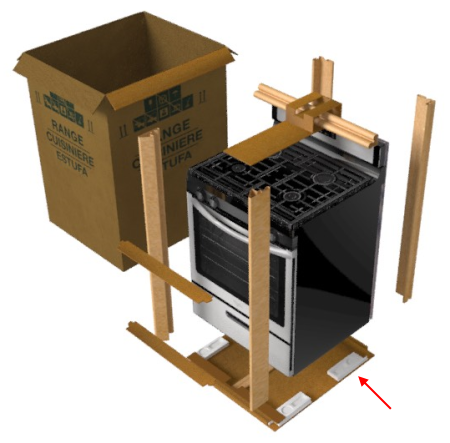 The Whirlpool all-renewable packaging with the foot bits by Cruz Foam.

“We as a maker of tens of millions of products a year are seeking to go above and beyond to eliminate the use of non-recyclable and single-use plastics because it is the right thing to do,” said Ron Voglewede, Whirlpool’s Global Sustainability Director. “Elimination of Styrofoam for large, heavy appliances is very difficult and any failures in a final product results in a massive loss in embedded carbon if damaged in transit. We seek innovation from everywhere and we know sometimes the newest ideas don’t necessarily come from the incumbents in the industry.”

Whirlpool worked with Cruz Foam to put together an alternative to one of the last remaining pieces of EPS used in its appliance packaging, a set of little molded feet that help immobilize and cushion things like stoves in the boxes they’re shipped in. It’s one of the forms that Cruz Foam can easily make (unlike, say, molded food containers — certainly possible but needs special machinery) and Whirlpool needs millions of the things. All of a sudden this shell-based foam went from promising experiment to major shipping product.

Felts said they’re in talks with numerous other companies to provide similar pieces — the agreements aren’t public, but major producers of TVs, food and drinks, even cars and parts are on the line. “It’s been nonstop. We’ve had to beat people away,” Felts said.

Despite a few false starts in writing about Cruz Foam, I kept in contact with them because it felt like they were perpetually in the “we’re about to” phase, with huge potential soon to be realized — but COVID and other realities of non-software startup intervened (for instance, they need manufacturing space and logistics partners all over the country — not exactly the best time to set that up). But now with the maturity of the process, an industry ready to pay a premium for green alternatives, and a real live order for millions of pieces, the company seems ready to explode into prominence.

I’m not the only one to think so, as Cruz Foam has already received about $5M in capital on top of the $2M in SBIR grants. The latest revision of the seed round put it at $3.375M, whereas that round in late 2021 was valued at $2.5M. The round was extended in order to include film stars Leonardo DiCaprio and Ashton Kutcher’s (through SOUNDWaves) investments; elementary math puts the difference at $875K, but no further details were disclosed about their stakes. Both will join as advisors.

Kutcher has been an active and involved investor for a few years and has talked about his approach on stage at TechCrunch Disrupt. DiCaprio is newer on the VC scene but has long been involved in social and climate advocacy. I wasn’t able to get either of the new high-profile investors on the phone (something about being busy), but they included statements in the press release.

DiCaprio: “Cruz Foam is taking a major step in reducing the environmental impact of the supply chain industry. The mission to eliminate single use plastics in the ongoing battle for a cleaner and more sustainable environment makes me excited to join as an investor and advisor and I look forward to what we’ll achieve together.”

Kutcher: “We see huge potential in the adoption of Cruz Foam’s consumer packaging as the industry moves away from petroleum-based products and towards new biomaterial technologies.”

The earlier seed investors included Tom Chi’s At One Ventures (he also met Felts in Alaska), the Sustainable Ocean Alliance, the Sony Innovation Fund, and Regeneration.VC. It’s worth noting that DiCaprio is also an investor and advisor with Regeneration.VC but they both invested independently here, and his position as advisor with Cruz Foam is likewise separate. 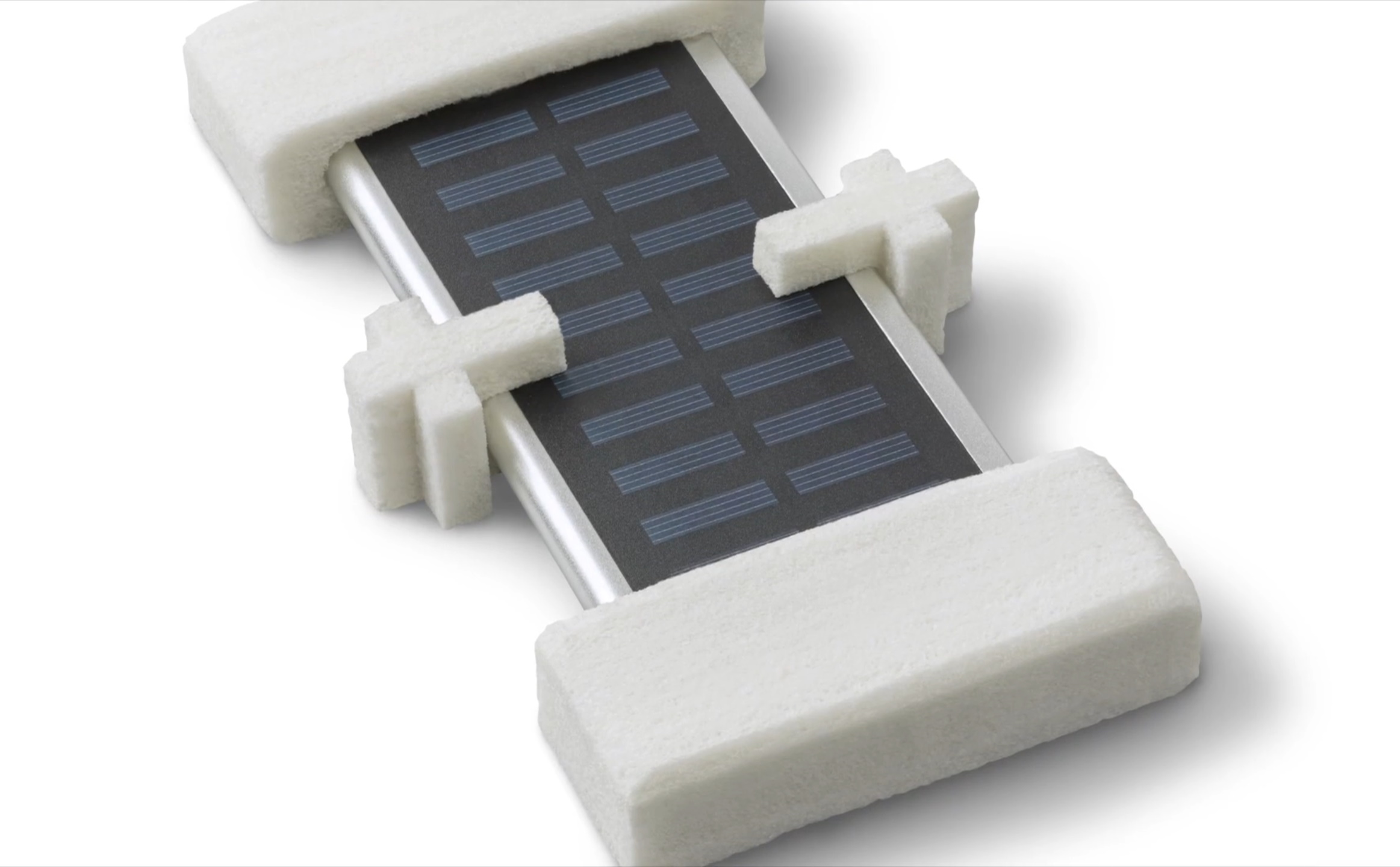 Cruz Foam enclosures for a piece of consumer electronics.

Cruz Foam’s ambition is to move beyond EPS replacement and leverage the versatility of this material to become a major materials innovation company, Felts told me.

In one of our conversations, I had suggested that the company’s future was not simply as a foam maker, as transformative as that could be for much of the industry, but as a kind of “Chitin King,” spinning shrimp into gold.

“That made me think — we started with foam but there is in our opinion a lot of opportunity for this material beyond that,” he said. “We’ve looked at injection molding, adhesives, etc… We’d love to be a tech innovation company that’s spinning off chitin applications. We want to create new technologies around new types of materials that we can deploy into industries, be it automotive, construction, consumer goods.”

There’s not likely to be any shortage of raw material any time soon, either. Even if the shrimp reserves started running low, new insect-based protein and feed companies have a similar problem.

“I’ve been contacted by 3, 4, 5 insect companies that are like, we have nothing to do with these garbage bags full of dead insects,” Felts said. Not a call most people would return, but this is a special case.

Though the potential is there, a stumbling block is regulation. Not that the government doesn’t want this kind of green innovation to happen, but regulatory structures around composting and collection at scale aren’t really prepared for it. There’s yard waste, food waste, “industrially compostable” items, safe for landfill, and dozens of other labels and regulatory schemes for handling all this different waste.

As Felts said, you could throw it in your garden and it would decompose in a month or two — but not everyone has a garden, and even if they did, they might not want decomposing sheets of chitin in it. And if the company and material is to scale, it needs to fit within one of the waste categories already out there – and that’s a long process of negotiation with city, state, and private authorities.

“The end of life, recycling, etc infrastructure is so convoluted; it’s a whole other conversation. What’s required is a lot of industry standardization in how these things are messaged. If people see like 5 different labels they don’t read them, they just throw it away,” he explained. Not that that’s a tragedy with such eminently compostable materials, but the new green, circular economy needs to build in this stuff from the ground up. “We just want people to understand that there are materials like Cruz Foam out there — some type of labeling that says, compost at home in the green bin, throw it in the yard waste. It has to be simple.”

That’s all in the medium term for a company just now getting its legs under it, however, and attempting to fulfill its first big order so that it can start answering the demand of the other companies banging on its door. But Cruz Foam has a long term plan and expects to raise money again very soon, perhaps as soon as summer, to get started on the next phase of its shrimp-to-gold alchemy.

Apple makes a new play for small businesses, taking on Google and Microsoft 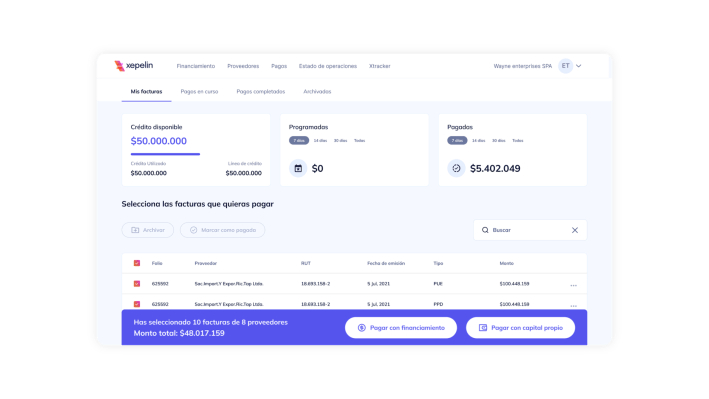