Five people were shot on Tuesday morning at inside a subway train in Brooklyn, New York, law enforcement sources said.

At least 13 people had been taken to local hospitals by 9:45am [13:45 GMT], according to officials at the scene, the nature of all the injuries was unclear, whether those in hospital had been shot, or injured by shrapnel from a suspected smoke bomb.

Kenneth Foote-Smith told the local NBC TV station that he was in the train car ahead of the one where the attack happened at about 0830 am [12:30GMT].

He said it began as the N train pulled out of the 59th street station.

“We crowded to the end of the car,” he said. “It was just a really scary moment for everyone.”

He said the train stopped, then traveled into the 36th street station where the conductor told passengers to get onto an adjoining R train. He and others, including some who were injured took that train to 25th street, where emergency personnel tended to the wounded, he said.

After initial reports that undetonated devices had been found at the scene, the New York City Police Department (NYPD) tweeted there were no active explosive devices at the station.

In regard to the multiple people shot at the 36th Street subway station in Brooklyn, there are NO active explosive devices at this time. Any witnesses are asked to call @NYPDTips at #800577TIPS. Please stay clear of the area. More provided information when available. pic.twitter.com/8UoiCAXemB

Police were searching for a suspect, described as a Black man wearing an orange construction vest and a gas mask.

A photo from the scene showed people tending to bloodied passengers lying on the floor of the station, putting tourniquets on wounds to staunch bleeding.

Other photos of the immediate aftermath showed smoke in the air at the station. Witnesses said one or more smoke canisters were used in the attack.

Hundreds of police officers were on the scene, he said, “actively” searching for the attacker.

More than a dozen police and fire vehicles with blue and red lights flashing were on the street outside the station, federal officials from the FBI and other agencies joined them as the morning wore on.

“There’s going to be a collaborative approach” to the investigation among local, state and federal law enforcement agencies, retired NYPD lieutenant Darrin Porcher told Al Jazeera. NYPD detectives will be working with members of the FBI Joint Terrorism Task Force and agents of the Bureau of Alcohol Tobacco and Firearms (ATF), he said.

Investigators will be seeking to assemble video of the suspect entering and leaving the subway system and will seek to determine the potential source of any smoke devices recovered at the scene, Porchin said.

Trains in and out of the station were stopped, causing major transport delays. Schools in the area were put on lockdown, with students sheltering in place.

The office of New York City Mayor Eric Adams did not immediately have more details.

@POTUS has been briefed on the latest developments regarding the New York City subway shooting. White House senior staff are in touch with Mayor Adams and Police Commissioner Sewell to offer any assistance as needed.

Merrick Garland, the US attorney general, was also monitoring the situation, his spokesman said.

Gun violence is a continuing issue in the US. There have been 131 mass shootings in the US – including this one – and more than 5,000 people killed in shootings nationwide so far this year, according to the Gun Violence Archive, a data-tracking group. 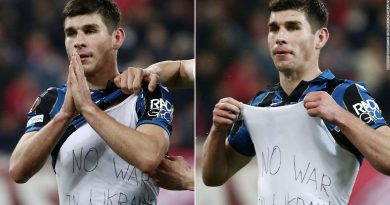