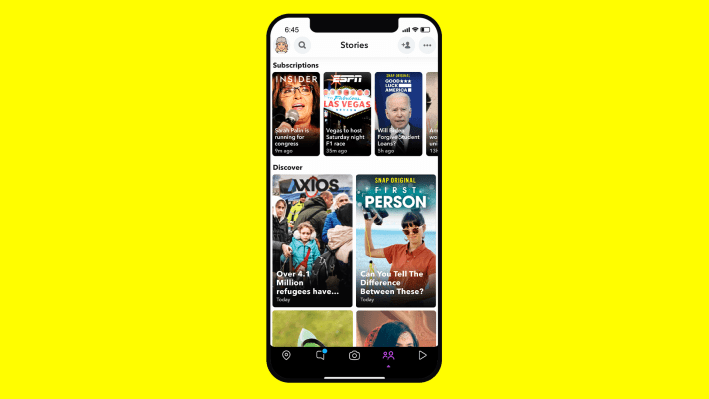 Snapchat is introducing a new “Dynamic Stories” feature that will allow publishers to automatically create Stories on the app based on news stories they publish online, the company announced on Tuesday. Early partners include CNN, Bloomberg, ESPN and more. The new feature uses a publisher’s RSS Feed to automatically create and post Stories on a publisher’s Snapchat Stories. The automatically generated Stories will appear in the app’s Discover feed, after which the Stories will then update in real time.

The company says the new format will play a roll in its effort to bring local new content to users on the app around the world. The new Dynamic Stories feature is currently being tested in the United States, the United Kingdom, France and India.

“We have always felt a deep responsibility to highlight news and information that is credible and from trusted and clear sources,” Snap said in a blog post. “Whether it’s breaking news from credible sources on the war in Ukraine or the latest in pop culture or fashion, Dynamic Stories helps Snapchatters learn about the world as it happens.”

Snap says the new feature gives publishers an easy way to create daily content on the app by combining the practice of publishing on Snapchat into their existing workflows. The new feature will make it easier for newsrooms, especially smaller local ones, to publish their content on Snapchat without having to manually do so. Since the process is automated, publishers won’t have to dedicate any additional time to reach users on Snapchat.

This isn’t the first time that Snapchat has looked to highlight news content on its platform. Back in 2018, Snapchat and NowThis made a deal that would see the social video news publisher launching a NowBreaking channel on Snapchat. The channel debuted on Snapchat’s Discover page in June 2018.

Before that, NBC News launched a daily show for Snapchat in 2017 that saw the newsroom air two episodes per day during the week. Following the success of the NBC News show, CNN launched its own daily news program on Snapchat.

In the blog post about today’s announcement, Snap took the time to reiterate that its Discover page only features content from verified media publishers and content creators.

OfftheGrid, a new Tinder-like travel app, aids travelers meet up with up and find out places