Palin’s lawyers are arguing the judge set too high a bar for her to prove the New York Times acted maliciously.

Sarah Palin, the former Republican vice presidential candidate and Alaska governor has called on the judge who oversaw her unsuccessful defamation case against the New York Times to disqualify himself, saying his series of errors tainted the outcome, requiring a new trial.

In a filing in federal court in New York City late on Tuesday, lawyers for Palin said US District Judge Jed Rakoff set too high a bar for her to prove the Times acted maliciously.

They said this “contaminated” jurors’ February 15 verdict against Palin, citing several jurors who later admitted to the judge’s clerk that they learned through “push” notifications to their mobile phones about Rakoff’s decision a day earlier.

“A reasonable person fully informed of the facts would question the court’s impartiality and predisposition,” Palin’s lawyers wrote.

She sued the Times and its editorial page editor at the time, James Bennet, over a June 14, 2017, Times editorial that addressed gun control and lamented the rise of inflammatory political rhetoric. It followed a shooting at a congressional baseball practice in Virginia, where Republican US congressman Steve Scalise was among the wounded.

The editorial incorrectly linked Palin’s rhetoric to a 2011 Arizona mass shooting where Democratic then-congresswoman Gabrielle Giffords was seriously wounded. The piece was corrected the next morning.

Palin is appealing the verdict and Rakoff’s dismissal.

Rakoff’s chambers did not immediately respond on Wednesday to a request for comment.

In a March 1 written opinion, Rakoff said Palin “wholly failed to prove” that the Times or Bennet acted with “actual malice”, a stringent standard, in publishing the editorial.

He said it was “unfortunate” that jurors learned about his planned dismissal, but said they maintained it did not affect their deliberations.

They also said Rakoff’s decision to talk to a reporter about the push notifications ran afoul of a federal rule governing judicial conduct, and could be seen as an “attempt to bolster the court’s rulings”.

That decision requires public figures alleging defamation to show that news media acted with actual malice, meaning they knowingly published false information or had reckless disregard for the truth.

Times spokeswoman Danielle Rhoades Ha said, “We remain confident that the judge and jury decided the case fairly and correctly.”

The Times is scheduled to reply to Palin’s arguments by April 12. 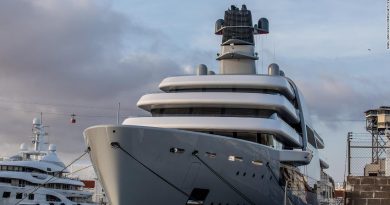 It’s not the best time to be a Russian oligarch

Most of world’s nations denounce Russia over Ukraine invasion