South Africa’s police minister Bheki Cele has visited the family of an activist killed earlier this week at the Chicken Farm informal settlement in Soweto following a dispute with Lesotho nationals.

While visiting Kgomotso Diale’s family on Wednesday, Cele promised the crowds gathered outside their home that “justice would be served”.

“Our job is to attend to criminals, be it foreigners or citizens, and if it is people who are in this country illegally committing crimes, the police will have to strengthen their hand,” the minister told a disapproving crowd.

South African police have already said investigations are continuing into the incident in which five other people were injured.

A group of residents from the Pimville and Kliptown communities – two of the oldest Black working-class areas in the Gauteng province – had attended a meeting on Monday with Lesotho nationals suspected of stealing public power lines that supply electricity to their neighbourhoods.

Diale was among the residents.

Witnesses who testified at a community meeting on Tuesday evening in Pimville alleged the Lesotho nationals opened fire with “AK-47s” after a short exchange between the parties.

“I’m still traumatised, I haven’t slept at all,” an elderly female resident who did not wish to be named told Al Jazeera. “They just started shooting at us. We were unarmed and we went there with the intention to have a conversation about how much [power] cable theft has been affecting our communities.

“Foreigners occupy a section of the Chicken Farm informal settlement, and the community knows that they steal the power lines and sell them. It’s a very lucrative business, but it results in electricity blackouts, sometimes for days,” she said.

Cele told the residents his department has assigned a 12-member team of detectives to investigate Diale’s death and said the perpetrators would be “arrested within 48 hours”.

The Pimville and Kliptown residents were joined by members of Operation Dudula, including its leader Nhlanhla Dlamini. Operation Dudula is a Johannesburg-born movement that has led several anti-immigration campaigns around the country.

However, residents insisted that the meeting was not organised by Operation Dudula.

“Members of Operation Dudula live in this community, but the Pimville community is very organised on its own,” said radio personality and activist Penny Lebyane, who visited the Diale residence to pay her respects. “This is not about isolating foreign nationals, but dealing with the onslaught of crime, drugs and guns in our communities.”

“If the minister, the police and the public were taking the issues raised by our communities seriously, Kgomotso would be alive today. Dismissing the community organising themselves against criminals as xenophobia is a failure to take accountability,” said Lebyane.

The incident is one of several acts of violence linked to tensions between foreign nationals and residents of predominantly low-income communities in South Africa.

On April 6, violent anti-immigrant protests flared in Diepsloot, resulting in damage to infrastructure and the closure of foreign-owned businesses. The following day, a Zimbabwean national, Elvis Nyathi, was attacked and burned alive by a mob who had been going door-to-door allegedly looking for undocumented foreigners.

Vuyolwethu Zungula, a member of parliament and president of the African Transformation Movement (ATM) insisted that the government was not doing enough to “enforce immigration laws, and as a result, poor communities bear the brunt”.

“Violent conflicts between South Africans and foreigners have been happening since 2008 and the communities affected have been raising the same issues,” he said. “Our people feel economically displaced by foreigners, especially those that are undocumented who tend to bring in prostitution, drug trafficking, the destruction of infrastructure and other crimes.”

In May 2008, xenophobic attacks on foreigners across all nine South African provinces led to the deaths of 62 people, including 21 South Africans, and left thousands injured, according to a Human Rights Watch report. The violence resulted in 40,000 foreign nationals voluntarily repatriating to their home countries.

“Illegal immigrants tend to settle in poor areas, this is not unique to South Africa,” added Zungula. “So if there are tensions in poor communities, it is caused by the government’s inability to control immigration and cater to the needs of the poor.”

Can Russia return to the world stage, as other aggressor nations? 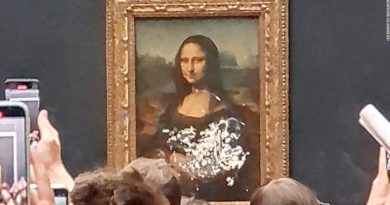 The ‘Mona Lisa’ has been caked in attempted vandalism stunt