Griner — who has been held in Russia since her arrest at a Moscow airport on allegations of attempted drug smuggling — attended the preliminary hearing in person Monday, arriving at court handcuffed and flanked by guards in black vests, according to a photo by AFP photographer Kirill Kudryavstev.

Her lawyer, Alexander Boykov, previously told CNN the hearing would occur behind closed doors at the Khimki court, just outside Moscow.

Griner, 31, a Phoenix Mercury player who plays in Russia during the WNBA’s offseason, was arrested February 17. Russian authorities claimed she had cannabis oil in her luggage and accused her of smuggling significant amounts of a narcotic substance, an offense punishable by up to 10 years in prison.

Griner’s detention, which has been repeatedly extended, has sparked a wave of support among dozens of organizations in the US that have joined Cherelle Griner, Brittney Griner’s wife, in urging President Joe Biden to strike an exchange deal with Russian authorities to release Griner and bring her home safely as soon as possible.

Griner’s supporters have expressed concern that she might be used as a political pawn, given rising tensions amid Russia’s invasion of Ukraine.
READ: Dozens of organizations sign letter calling on President Biden to strike deal for Brittney Griner’s release

More than 40 organizations — including the National Association for the Advancement of Colored People, Human Rights Campaign, GLAAD, the National Urban League and the Women’s National Basketball Players Association — signed a letter to President Biden and Vice President Kamala Harris calling for action to get Griner released.

US Secretary of State Antony Blinken spoke to Cherelle Griner one-on-one last Wednesday, according to a senior State Department official. And US national security adviser Jake Sullivan told reporters aboard Air Force One on Tuesday he and Blinken spoke with Cherelle “in the last few days … to convey that we just can’t even begin to imagine what the family must be going through” and what “Brittney must be going through.”

Cherelle Griner said last week she hasn’t talked to her wife since February 17.

“I’ve got no higher priority than making sure that Americans who are being illegally detained in one way or another around the world come home,” Sec. Blinken told CNN’s “State of the Union” at the Group of 7 summit Sunday.

“That includes Paul Whelan, that includes Brittney Griner, that includes people in a number of other countries,” he added. Whelan is a US citizen who was detained in Moscow in 2018 and arrested on espionage charges. He has denied the charges.

“I can’t comment in any detail on what we’re doing, except to say this is an absolute priority,” Blinken said.

While Griner’s trial has been scheduled, that should not prevent US officials from trying to negotiate her release, her agent said on Twitter, calling Monday’s hearing “administrative in nature and not on the merits.”

“The negotiation for her immediate release regardless of the legal proceedings should remain a top priority,” Lindsay Kagawa Colas wrote, “and we expect @POTUS and @VP to do everything in their power, right now, to get a deal done to bring her home.”

The US Embassy in Moscow will send a US diplomat to Brittney Griner’s hearing on Friday, a US official told CNN.

She expressed hope Griner will return home soon and that President Joe Biden will “take the steps to ensure that she comes home.”

CNN’s Kylie Atwood and Betsy Klein contributed to this report. 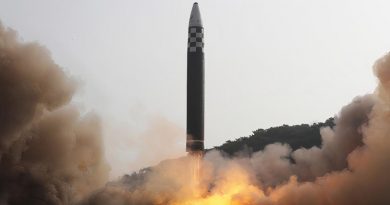 What we know about North Korea’s new ICBM

Four University of Idaho students found dead near campus in US