A summer heatwave that has triggered devastating forest fires across Southwest Europe shows no signs of abating, as parts of the continent gear for new temperature records early next week.

Firefighters in France, Portugal, Spain and Greece are battling forest blazes that have ravaged thousands of hectares of land and killed several people since the start of the week.

It is the second heatwave engulfing parts of Southwest Europe in weeks as scientists blame climate change and predict more frequent and intense episodes of extreme weather.

Firefighters in the coastal town of Arcachon in France’s southwestern Gironde region were fighting to control two forest blazes that have devoured more than 10,000 hectares (24,700 acres) since Tuesday.

“It’s a herculean job,” said an official from the fire and rescue service, which has 1,200 firefighters and five planes in action.

In the latest weather warning, 38 of France’s 96 departments were listed on “orange” alert, with residents of those areas urged to be vigilant.

The heatwave in western France is expected to peak on Monday, with temperatures climbing above 40 degrees Celsius (104 degrees Fahrenheit).

In neighbouring Spain, firefighters are battling a series of blazes after days of unusually high temperatures that reached up to 45.7C (114F).

The nearly weeklong heatwave has caused 360 heat-related deaths, according to figures from the Carlos III Health Institute.

More than 3,000 people have been evacuated from homes due to a large wildfire near Mijas, a town in the province of Malaga that is popular with Northern European tourists, the region’s emergency services said in a tweet.

Fires were also burning in the central region of Castille and Leon and in Galicia in the north.

There was some respite for firefighters in Portugal, where temperatures dropped across most of the country on Saturday after reaching about 40C (104F) in recent days.

A total of 39,550 hectares (98,000 acres) area was ravaged by wildfires from the start of the year until mid-June, more than triple the area razed by fires in the same period last year, data from the Institute for the Conservation of Nature and Forests showed.

An area equivalent to almost two-thirds of that has burned during fires in the last week.

Portugal’s Health Ministry said 238 people had died as a result of the heatwave between July 7 and 13, most of them elderly people with underlying conditions.

Authorities in the French Alps urged climbers bound for Mont Blanc, Europe’s highest mountain, to postpone their trip due to repeated rock falls caused by “exceptional climatic conditions” and “drought”.

The call comes after a section of Italy’s biggest Alpine glacier gave way at the start of the month, killing 11 people, in a disaster officials blamed on climate change.

Explainer: The second round of France’s presidential election 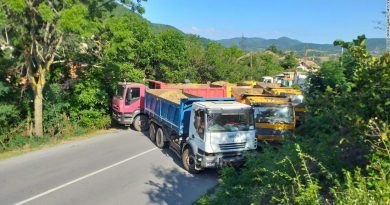 Buffalo mass shooting: What we know so far