In what has been called one of the worst floods in recent history, 120 people are reported dead in Bangladesh and a whopping 15 million displaced.

Speaking to Anadolu Agency, flood victims in remote areas said although they have to fight rising waters almost every year, this year the losses have been especially huge.

Peara Begum, 65, a mother of five, has been living on a highway leading to the border town of Companiganj from the northeastern district of Sylhet, as her home was washed away by floods.

The floodwaters flowed into her tin-and-bamboo home and began racing across the floor. Her family members had to stand in waist-deep waters for a full two days before they were finally rescued, she said.

“With the help of some neighbors, we reached the highway by boat somehow and have been living here under the open sky since then with a single dress,” she said, pointing towards a large swath of water, gesturing to where her village might have once stood.

But with a sheet of water covering everything, there are no traces of villages around.

As Anadolu Agency visited the flood-hit Sylhet region bordering India, it could see telltale signs of destruction left behind by the floods. Villagers were seen wading, swimming, and paddling using makeshift rafts or small skiffs, rescuing those marooned, or delivering aid. A large swath of habitats and farms are underwater.

It took nearly an hour by boat to reach the waterlogged place from where Begum and others were forced to relocate due to the deadly floods.

In some places, where the water has receded, people were seen trying to rebuild their houses making use of the odd bits and pieces of materials available.

“Only some wood and tin is left, and I’m trying to restore it just to take shelter with my three kids,” said Mohammad Rafiq.

He added that they need at least 10-15 years to recover from the damage caused by the floods.

In the remote Gussagram locality, Mohammad Juel asked the government to find a permanent solution to the floods that hit them every year.

“If the government makes concrete houses on high pillars for us, then we can get relief from such floods permanently,” he said.

He added that many residents of the area have migrated to different urban areas due to floods. Some of them are begging now after failing to find any other means of livelihood. Floods turn people into paupers overnight.

Heavy rains lashed the region ahead of the scheduled monsoons, a harsh reminder that climate change is bringing more extreme weather around the world.

Bangladesh’s 58 rivers, which create fertile plains, have also been a bane for the country, as they overflow frequently, causing death and destruction in the region.

Md. Mojibur Rahman, chief district officer, told Anadolu Agency that the government is on its way to finding a permanent solution to floods in the most vulnerable Sylhet and adjacent districts.

“From now on we will make more culverts instead of constructing roads so that during the rainy season, water flow is not interrupted. On the other hand, we will also dredge the two main rivers of Surma and Kushiara,” he said.

He also said the government has allocated funds for reconstructing the damaged houses of the people affected by this year’s floods. 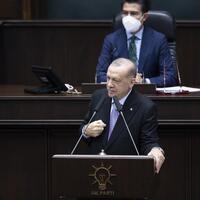 Export from Turkey: A guide for Turkish SME exporters