When Finland and Sweden announced their interest in joining NATO, the two Nordic states were expected to be swiftly accepted as members of the defense alliance. But joining NATO requires consensus approval from all existing members, and Turkey – one of the group’s most strategically important and militarily powerful members – is not happy.

The reasons why are complicated, emotional and steeped in decades of often violent history.

Nonaligned up until now, Finland and Sweden last weekend announced plans to abandon that position and join NATO in the wake of Russia’s bloody invasion of Ukraine.

Official partners of the alliance since the 1990s, the idea that the Nordic states might actually join the group made Moscow bristle. NATO expansion is something it has previously cited to justify invading Ukraine, also a NATO partner.

Now, Turkish President Recep Tayyip Erdogan has the power to determine the future of the NATO alliance — and its power and size in the face of Russia’s war.

In fact, Erdogan has already blocked an early attempt by NATO to fast-track Finland and Sweden’s applications, saying their membership would make the alliance “a place where representatives of terrorist organizations are concentrated.”

As of 2022, NATO has expanded to let in three former Soviet states and all of the former Warsaw Pact countries.

The clash has sent Western diplomats scrambling to bring Turkey on side, as Ankara presented a list of grievances to NATO ambassadors about its issues with the Nordic states – Sweden in particular.

What are Turkey’s grievances against Sweden and Finland?

When Erdogan talks of “terrorists” in this context, he means the Kurdish Workers’ Party, or the PKK – a Kurdish Marxist separatist movement that has been fighting Turkish forces on-and-off since the 1980s. It operates mostly in southeastern Turkey and parts of northern Iraq.

The PKK is classified as a terrorist organization by Turkey, as well as by the U.S., Canada, Australia and the European Union.

In fact, Sweden was one of the first countries to designate the group as a terrorist organization in 1984.

However, Turkey says that Sweden has supported PKK members and provides protection for them. Sweden denies this, saying it supports other Kurds who are not in the PKK – but the details are more complicated.

Sweden’s foreign ministry declined to comment on Erdogan’s accusations when contacted by CNBC.

Since 1984, between 30,000 and 40,000 people are estimated to have died in fighting between the PKK and Turkish government, according to Crisis Group. The PKK have carried out scores of attacks within Turkey.

Members of Turkish Armed Forces (TSK) continue operations against the PKK, listed as a terrorist organization by Turkey, the U.S. and the EU, and the Syrian Kurdish YPG militia, which Turkey regards as a terror group, within Turkey’s Operation Peace Spring in Ras Al Ayn, Syria on October 17, 2019.

When it comes to Finland, Turkey’s opposition to it joining NATO appears to be more by association – the country has a far smaller Kurdish population than Sweden, but its foreign policy tends to be similar.

Finland has also banned the PKK as a terrorist organization, but joined Sweden and other EU countries in halting weapons sales to Turkey in 2019 over Ankara’s military action against Kurdish groups in Syria.

Erdogan is demanding that Sweden extradite a list of people that Turkey has charged with terrorism. He also wants Sweden and Finland to publicly disavow the PKK and its affiliates, and to lift their weapons ban on Turkey.

For Hakki Akil, a former Turkish ambassador, the Turkish perspective is “very simple.”

“If Finland and Sweden want to join a security alliance they have to give up to their support to a terror organization [PKK] and not give refuge to them. On the other hand they have also to accept Turkish requests of extradition of 30 terrorists, [which are] very specific cases.”

Why do the Kurdish people matter to Turkey?

The Kurdish people are often described as the world’s largest ethnic group without a homeland – an estimated 30 million people. Mostly Sunni Muslim, they have their own unique language and customs.

Nearly 20% of Turkey’s 84 million-strong population is Kurdish, with some Kurds holding important positions in Turkish politics and society, though many say they are discriminated against and their political parties face crackdowns from the Turkish state.

Spread out between Turkey, Syria, Iraq and Iran, they have been heavily persecuted, marginalized and even been victims of genocide in the counties where they live – see Saddam Hussein’s chemical gas attacks that killed nearly 200,000 Kurds in Iraq in the late 1980s. Various Kurdish groups have pushed for Kurdish autonomy and statehood over the decades, some peacefully and some, like the PKK, through violence.

Kurds celebrate to show their support for the independence referendum in Duhok, Iraq, September 26, 2017.

Kurdish fighters in Syria linked to the PKK played a major role in the fight against ISIS, receiving weapons support and funding from the U.S and Europe, including Sweden. This sparked huge tensions with Turkey, which then launched attacks on the Kurds in Syria.

“You are talking about people who have been actively fighting with Turkey for more that 40 years and killing tens of thousands of civilians in the process,” Muhammet Kocak, an international relations specialist based in Ankara, told CNBC.

“Turkey is not happy about the fact that they suddenly become good guys just because they came in handy against ISIS.”

Western governments hailed the Kurdish fighters as allies, and several EU countries put various embargoes on Turkey due to their targeting of Kurdish militias in Syria, highlighting the intractable differences between how each side perceived the fighters.

Underlying the tension between Turkey and Sweden is how each country defines “terrorist,” says Hussein Ibish, a senior resident scholar at the Arab Gulf States Institute in Washington.

“It’s not just a matter of Sweden’s liberal policies towards Kurdish refugees and political dissidents and activists. It’s also a reflection of differing definitions over who and what constitutes intolerable Kurdish extremism,” Ibish said.

“Turkey basically classifies all Kurdish groups it strongly dislikes as PKK front organizations. That includes many non-PKK Kurdish entities and organizations in and from Turkey itself, but also the Western-backed Syrian Democratic Forces (SDF) in Syria and a number of Iraqi Kurdish groups as well.”

Sweden has a long history of taking in Kurdish refugees and asylum seekers, particularly political refugees. Several Kurds even have seats in Sweden’s Parliament.

While most of the Kurds living in Sweden – which local groups say number as many as 100,000 – have no affiliation with the PKK, the Swedish government has supported members of other Kurdish organizations, particularly the political wing of the PKK’s Syrian branch, called the PYD.

Sweden says the PKK and PYD are different – but Turkey says they are one and the same.

Stockholm also politically and financially supports the Syrian Democratic Council (SDC), the political wing of the SDF, a Kurdish-led militia group created with support from the U.S. to fight ISIS in Syria. Ankara says that the SDC is dominated by PKK terrorists.

In 2021, Sweden’s government announced an increase in funding for Kurdish groups in Syria to $376 million by 2023, saying it remained an “active partner” to Syria’s Kurds and that its funds were aimed at “strengthening resilience, human security and freedom from violence” and improving “human rights, gender equality and democratic development.”

What will Sweden do?

With Swedish elections coming up in September, it’s unlikely that the government will make any major concessions to Erdogan that would make it look weak, according to some analysts.

Others believe that Erdogan ultimately will not block Sweden and Finland’s NATO memberships, but instead is seeking to improve his waning popularity at home.

“My suspicion is that Turkey, eventually, especially if it can extract a few concessions here and there from the Western powers and its NATO allies, will not ultimately seek to block Finland and Sweden from joining the organization,” the Arab Gulf States Institute’s Ibish said.

“The Russian invasion of Ukraine and the fact that the war now focuses on parts of that country that are adjacent to Turkey and of profound strategic and even historic interest to Ankara has reminded many Turks of the value of membership in NATO.”

Still, NATO may face gridlock for some time if Erdogan is not satisfied with Sweden and Finland’s responses to his demands. 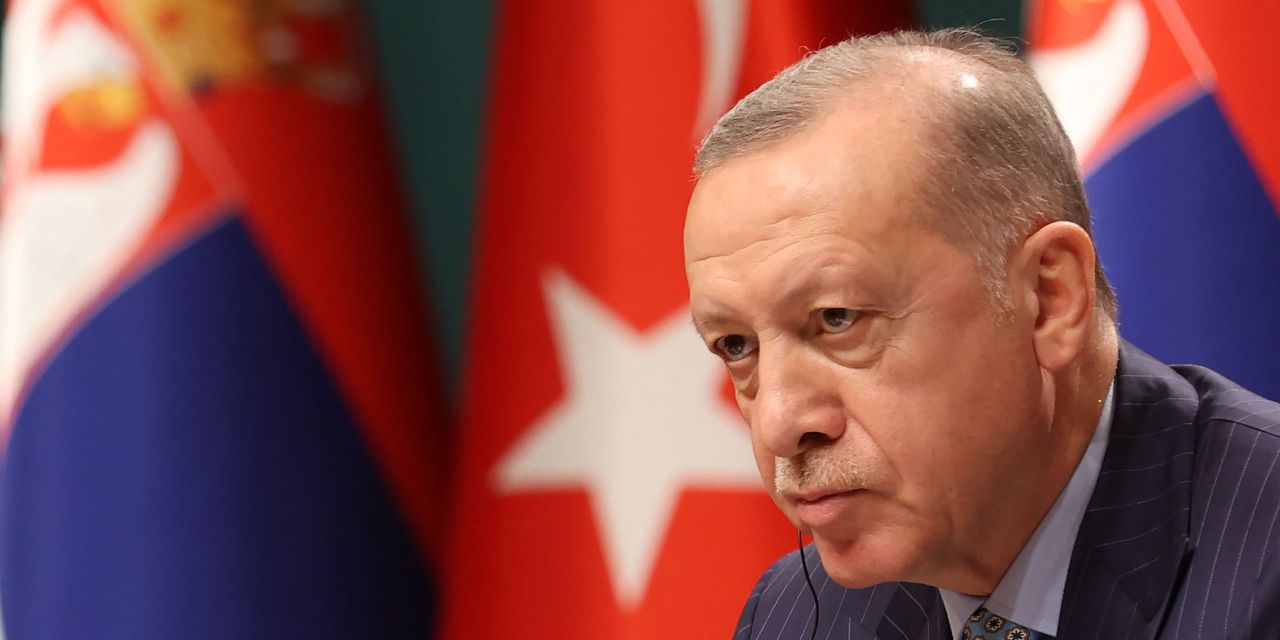 ‘Better’ Than HIMARS, Ukraine Gets New Laser-Guided MLRS From From Turkey That Can Even Strike Moving Targets